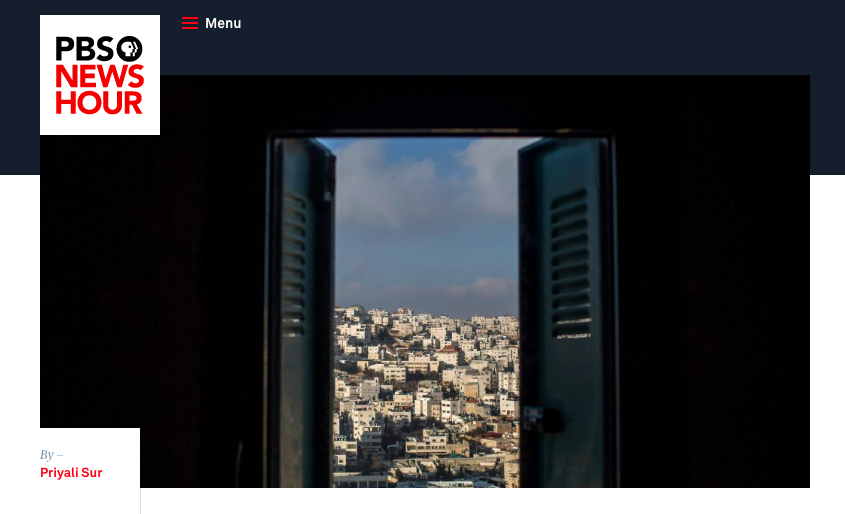 The story was initially published in PBS Newshour

We sat sipping slushy mojitos. It was the kind of night that makes you want to throw away your heels and dance without a care in the world. Swaying to the electro house music at Kuli Alma in south Tel Aviv were the young, insatiable night owls of the city. On my way there, my Israeli friend Etay, a 21-year-old ballet dancer, walked me through the Ruppin street, talking excitedly about his current role as Billy in the musical “Billy Elliot” and admiring the Bauhaus architecture that dotted the city.

My mind raced back to earlier in the day when I zipped along Highway 1, connecting Tel Aviv to Jerusalem, and then crossed a checkpoint to enter West Bank. I had carefully hid my keffiyeh — the Palestinian checkered black and white scarf — under the car seat to avoid suspicion by the guards. Once the first hurdle was cleared, I drove through beautiful, mountainous, brown landscapes until I reached Nablus and the home of Bashar.

Even after 10 years of being a journalist and documentary filmmaker, I still don’t know what is the right question to ask a family member who has lost a loved one. A picture of Bashar and another one of Yasser Arafat, the former leader of the Palestine Liberation Organization, on the wall welcomed us along with a bunch of enthusiastic young men in the room. Abu Ashraf, Bashar’s brother and the only older man in his 50s in the room, turned to my camera and started talking about how he didn’t know a thing about his brother’s plans to carry out the suicide bombing attack that killed seven people in 1997 at the Ben Yehuda street. Fumbling a little and nervously turning a rosary that was the Palestinian flag colors — red, green, white and black in color — he said he understood the loss of the families who had lost their loved ones in the attack. He had a lost a brother too. No one’s loss was bigger, he added thoughtfully. They had equally suffered because of the occupation.

Watch the trailer of ‘sahbak’. It’s a film about stories of Israeli-Palestinian love and friendship.